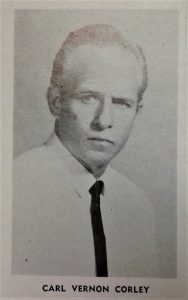 Carl Corley was born in Mississippi in 1919, fought at Guadalcanal and Iwo Jima during World War II, and spent the following forty years as an engineering artist for the Mississippi and Louisiana Departments of Transportation. But while he was drawing maps and illustrating scenes of Louisiana folklife, he was also writing dozens of semi-autobiographical gay pulp novels, painting most of their covers himself, and publishing them under his own name through major pulp companies of the late 1960s. In the 1970s and after, he devoted himself to newspaper comic strips about local history and religious topics, while also writing and drawing extensive gay-themed science-fiction comics. Those stories went unpublished, and Corley’s novels became harder and harder to find… until now.

Find more information in the menu above, or go straight to the gallery and library for art, comics, and novels!